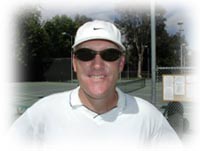 Chris Baar is a USPTA certified teaching pro with a Professional 1 rating. Chris played at the college from 1972 – 1974. Afterwards he played on the pro circuit from 1974 – 1975. Shortly after that Chris started teaching tennis in 1977, as an Associate Head Pro at the Jack Kramer Tennis Club. From 1979 until 1994 Chris was the Head Pro and Tennis Director at the South End Racquet and Sports Club in Torrance. From 1990 until 1992, Chris was one of the coaches for the South Bay USTA Area Training Center. In 1994, he became the Tennis Director at the John Wayne Tennis Club until 1996, when he went on to become the Head Pro at Palisades Tennis Club. Since 1998, he has been the Head Pro at Los Caballeros Racquet & Sports Club.

During his years of coaching, Chris has developed a lot of successful tennis players that have done well in Southern California, college, and the pro tour. Melissa Gurney ( #1 in Southern California), Trey Lewis ( # 31 WTA World Ranking), and Lindsay Davenport, are just a few of the many that Chris has worked with over the years.